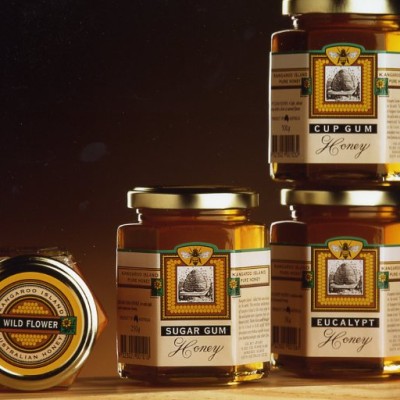 Hog Bay Apiary has been supplying Kangaroo Island honey to the tourist and gourmet honey market since 1993. We have been accredited as from the 21st November, 2002 by the National Association of Sustainable Agriculture, Australia (N.A.S.A.A.) as producers of organic honey for our range of liquid honeys.
We also pack a traditional creamed honey, valued for smooth consistency and flavour.

The Ligurian bee is famous for its gentle nature and honey production. Originally from the Province of Liguria, Italy, the Ligurian bee was introduced to Kangaroo Island in the early 1880’s to preserve the genetic heritage for future generations.

The Ligurian bees thrive in the pristine environmental conditions of Kangaroo Island, producing unique honeys from Australian eucalypts and other flowering species.

Not open to the public, but find us at the Kangaroo Island Farmers' Market at Penneshaw