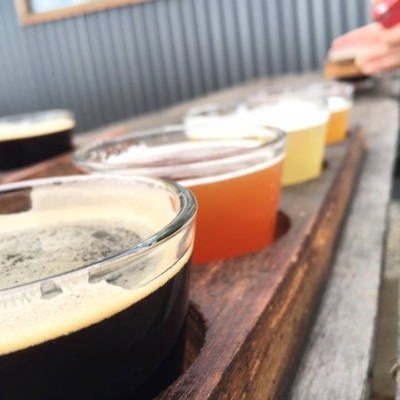 Located on pristine Kangaroo Island, this brewery is born from blood and sweat.

This Island has been built on the hard work of generations before, something not to be taken lightly. Whether it was the first English settlers of the South Australian Company or the following soldier settlers making this land arable, hard work and perseverance has been the underpinning quality of KI and it’s people. At Kangaroo Island Brewery we want to homage to those qualities and make the kind of beer that those first hard working settlers would be proud of.

Although Nina and Mike haven’t been on Kangaroo Island as long as the original settlers, they still love and appreciate Kangaroo Island for it’s heritage and natural beauty. Nina’s roots are in the ecological side of KI working with both Kangaroo Island Marine Adventures and Raptor Domain. This gives Nina the hands on experience with both marine animals and the airborne variety. Being the eco friendly partner in operations, she dictates the sustainable path that Mike is to travel! Mike has been a builder for 10 years in the Fleurieu Peninsular and Kangaroo Island. Lucky enough to work on many different and varied building sites, Mike has been able to bring a rustic yet neat and modern feel to the new brewery. Most if not all materials in the new KIB are recycled and have an amazing story. From local shearing sheds to local quarried stone the brewery is local as hell!

So why a brewery? Well, it just makes sense. The Island is lucky enough to have fantastic wineries and even a micro distillery but up until now, no brewery. Nina and Mike hope that they can do justice to KI and fill the gap.

Finally, in being fresh and new we are learning as we go and we want your input. We want to steer this brewery in a direction dictated by the customer and not big industry. We will over the course of the next 24 months aim to make this brewery and it’s beer in a 100% KI and want to brew beers that the locals and tourists value alike. So if you’re in the brewery, make yourself at home, get comfortable and get to know both Mike and Nina. We want to make a beer for you that makes you happy!

Limestone Road Pale Ale
A mix of Barley and Wheat malts combined with four different kinds of hops delivers a refreshing brew suitable for 12 months of the year! Many different hops in low volume offers up a flavour that most people will enjoy but not knock your socks off. Ferment it in an oak barrel for a month to soften and you’ve got our pale.
Golden Ale
A step up from our pale, this brew is also barrel fermented but for a bit more body we’ve added crystal malt and more hops. A touch more bitter than the pale but just as refreshing, galaxy hops give this beer an unmistakable flavour. Note the darker colour thanks to those deeper malts and you get the name – golden ale.
Amber Ale
Take golden ale, add more malt and turn up the hop, you get the third in the series to deliver more punch. A fruity note on the head thanks to galaxy and cascade hops and an almost warm home-like depth provided by Amarillo hops. This one is for the beer lover and is our earthiest brew yet.
Summer Ale
This brew is super easy to drink and designed for the commercial beer lover. It is light on malt flavours and light on hops but the hops used have a citrus note that you may detect. This is what we call a SMASH beer; it contains a Single Malt and Single Hop variety.
Indian Pale Ale
Indian Pale Ale is a favourite of craft breweries the world round. This beer lets us throw heaps of hops and malts together to generate a stronger flavour and beautiful colour. The IPA comes from a time when beer was transported between the colonies and spoilage was an issue. Hops containing natural preservatives, and already in beer, was added in larger quantities to the brew enabling the colonies to enjoy a beer from home. Backstairs Passage is only 14km wide but hey….why not! More for the real beer drinker who wants to taste deeper body and flavour.
Neens’ Ginger Wheat
Take wheat malts and add ginger, that equals ginger beer! A subtle hint of ginger, not too strong means it pleases most with-out being too bitey. If you know a thing or two about brewing, you know that yeast eats sugar, and if you add more sugar you get more alcohol. But a ginger beer should be sweet right? Usually brewers add a lactose sugar (a sugar yeast can’t eat) or chemical to kill the yeast, but we didn’t want that, nor did our non cow milk drinking mates. This means less chemicals – perfect.
Sheoak Stout
A deep blend of Maris Otter malt, crystal malt and black barley gives this glossy black liquid a beautiful taste. Finished off with East Kent Goldings hops, this stout is mild and not too heavy. We add charred sheoak pieces (a tree from KI) to the fermenters to give it a nice woody smokey flavour. Get the fire going and the stout out, it’s a winter brew for the consummate beer drinker.
KIB Cerveza
A Mexican inspired brew made using a combination of malted barley and flaked rice. Light on colour and not too much hop, this is a brew that goes well in hot weather and equally with hot food. So get on the SPF 30+ and crack a cerveza.